It has been WAY too long since I published a post on this blog, so to begin, a little life update:

First off, I am enrolled in two summer classes. The first, neuroanatomy, is online and is wickedly difficult, spanning the entire four months of summer. I just did my second online midterm last Wednesday and my self-esteem still has not fully recovered. The second class is cultural psychology, which is condensed into one month with lectures three times each week. I love the content and the professor is such a lovely person. I had the first midterm for that class last Friday and I feel pretty good about it.

I am also working full-time at the same job I have had for the last four summers. While it varies across countries, full-time employment is defined in Canada as working 30 hours or more per week at one's main or only job. Well, from July 1-15, I worked just over 97 hours.

Balancing school and work has been a real challenge for me, and while it means I will only have one more university term to go before I graduate and I can start saving up for graduate school, I have not had much time for anything else.

That being said, a few weeks back, my friend Travis and I got together to celebrate his 29th birthday and tried our hand at making chocolate soufflés. I think they actually turned out pretty well.

Step Two
In a large heatproof bowl set over a pot of boiling water, combine chocolate, vanilla, and water. Stir until chocolate is melted and mixture is smooth. Takes about 10 minutes. Then remove from heat and let cool to room temperature, about 20 minutes. 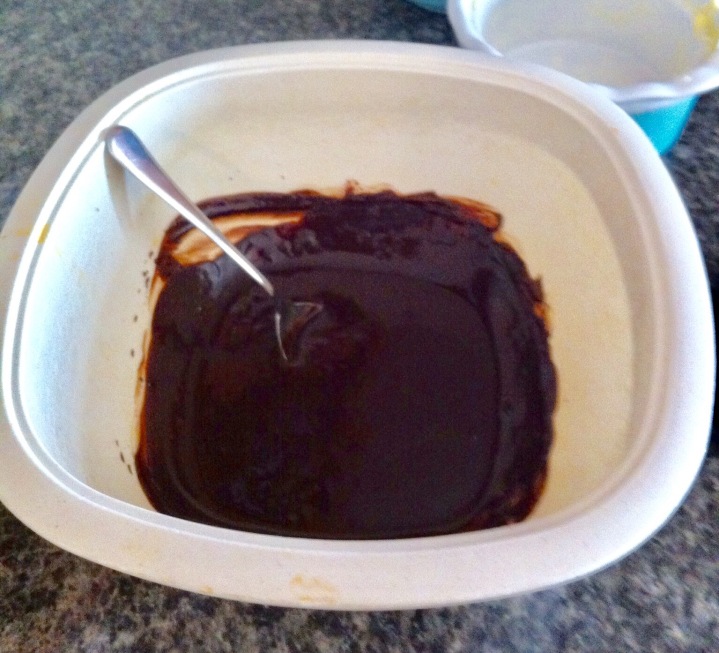 Step Three
Separate egg whites from egg yolks. Then stir egg yolks into cooled chocolate mixture until well combined. This is your soufflé base. Set aside.

Step Four
In a large bowl, using an electric mixer, beat egg whites and cream of tartar on high until soft peaks form, about two minutes. Then gradually add sugar and beat until stiff, white peaks form, about five minutes. Do not overbeat.

Step Five
In two halves, fold egg-white mixture into soufflé base. To do this, use a silicone spatula to gently cut through the centre of the base and lift up some from the bottom of the bowl. Turning bowl, continue to cut down and lift up base until just combined. 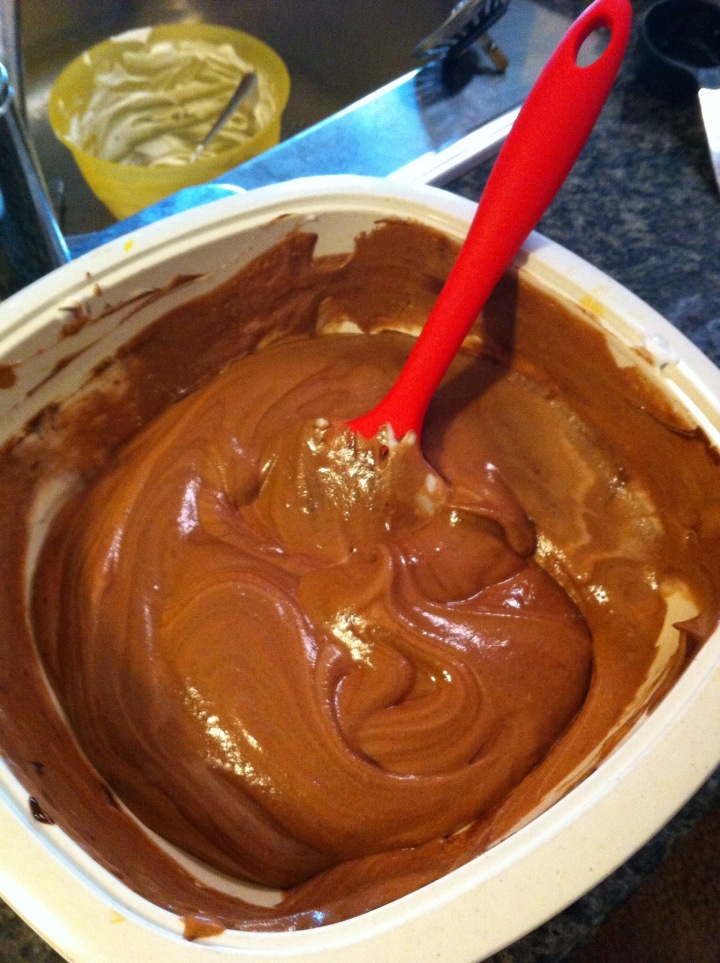 Step Six
Transfer mixture to baking dish, ensuring none gets on the top edge of the dish. Smooth top.

Step Seven
Bake soufflé until puffed and set, around 30-35 minutes. DO NOT OPEN OVEN during first 25 minutes of baking. Then SERVE IMMEDIATELY.

Have you ever made soufflé before??? Let me know in the comments below!!! 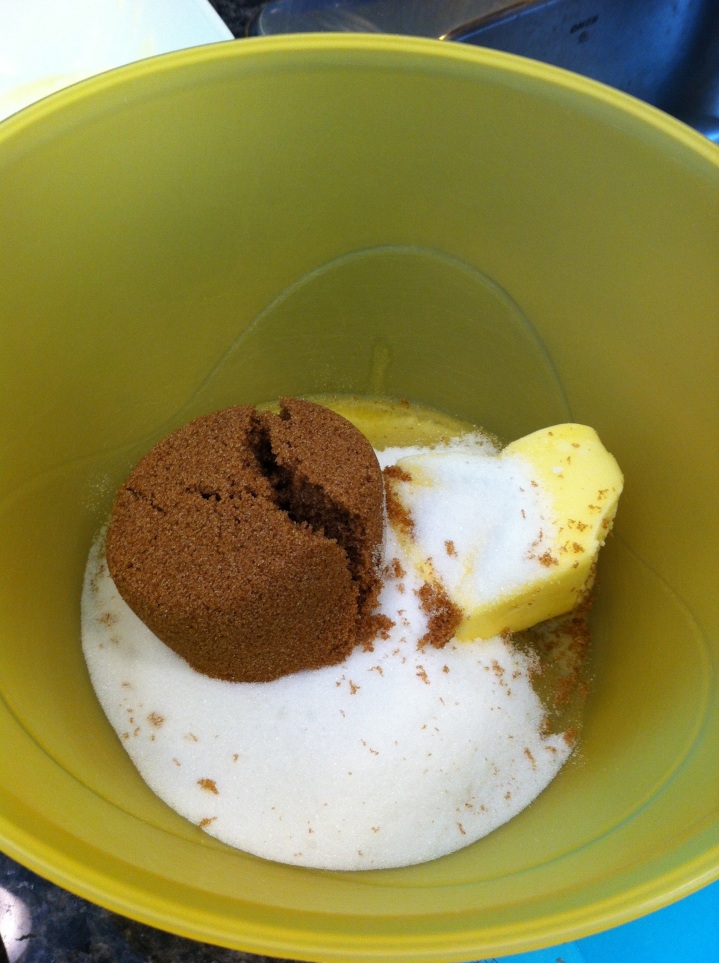 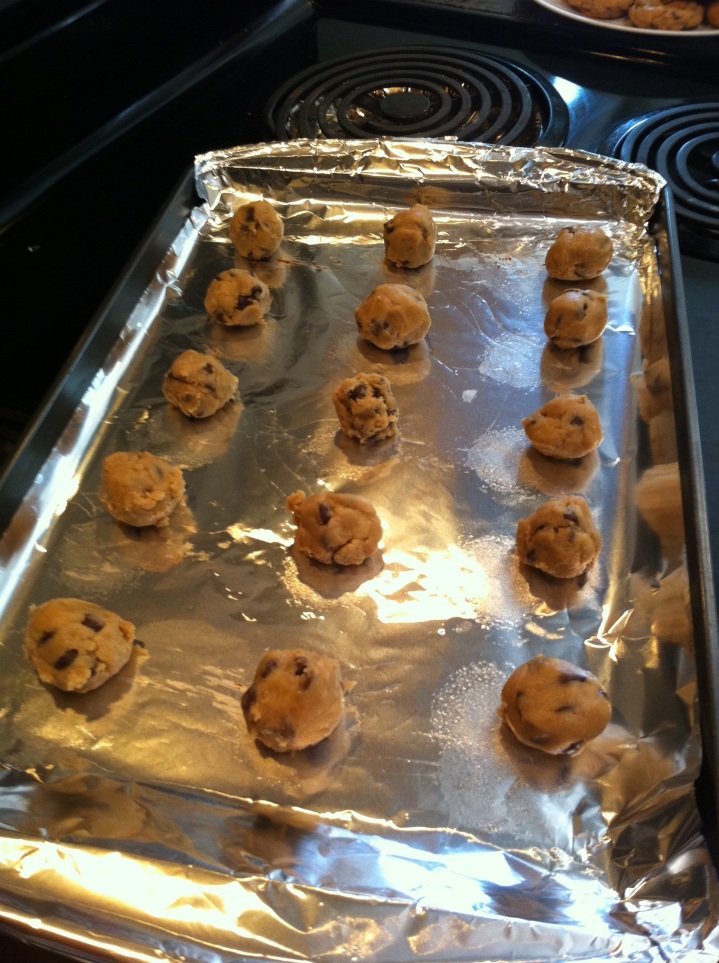 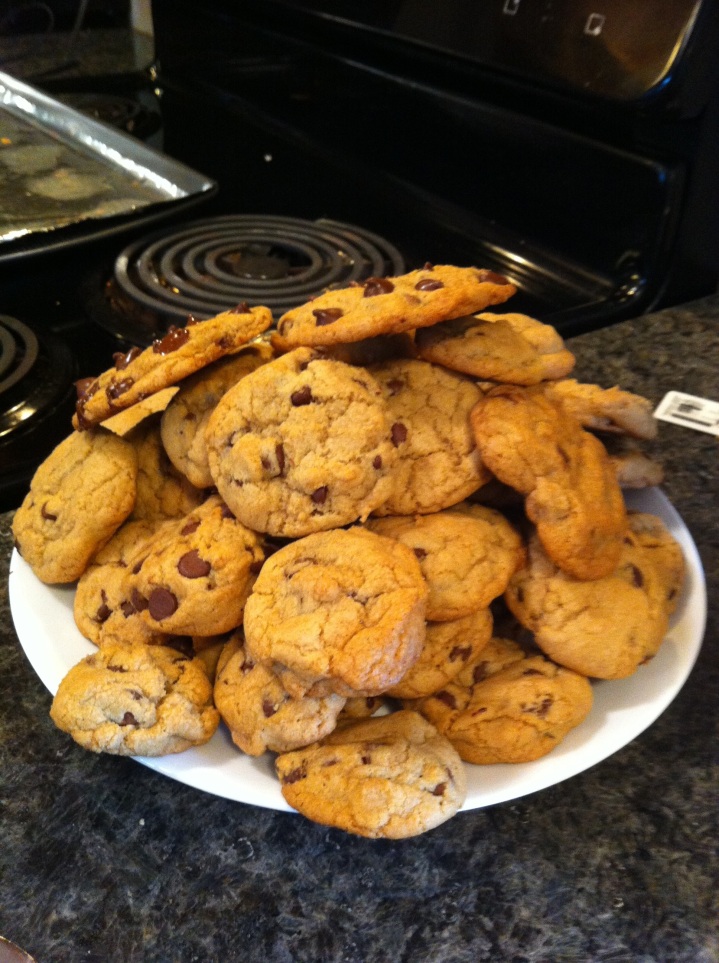 If you have been reading this blog for awhile, you might remember that I did a post about chocolate chip cookie baking for one of the days of Blogmas. However, my friend Travis with whom I do most of the baking that appears on this blog, turned 28 on Thursday and we wanted to bake something classic.

After whisking the batter for cupcakes and cheesecake with a manual whisk since we didn’t have an electric mixer, I got him a mixer for his birthday and we tested it out on this cookie recipe. I have to say, it worked pretty darn well and sped up the prep time by a good 15 minutes. 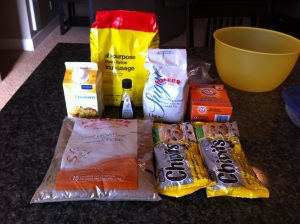 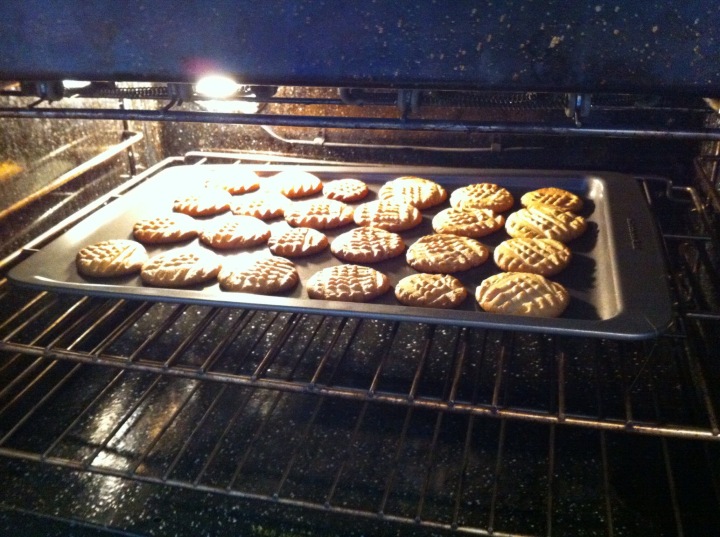 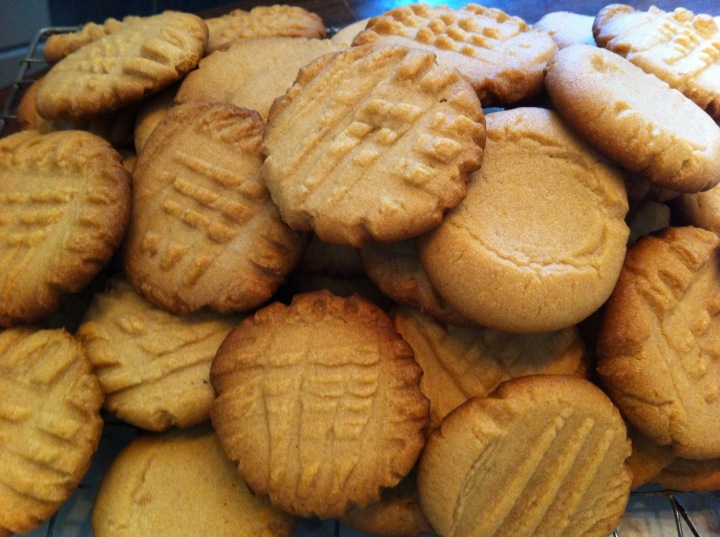 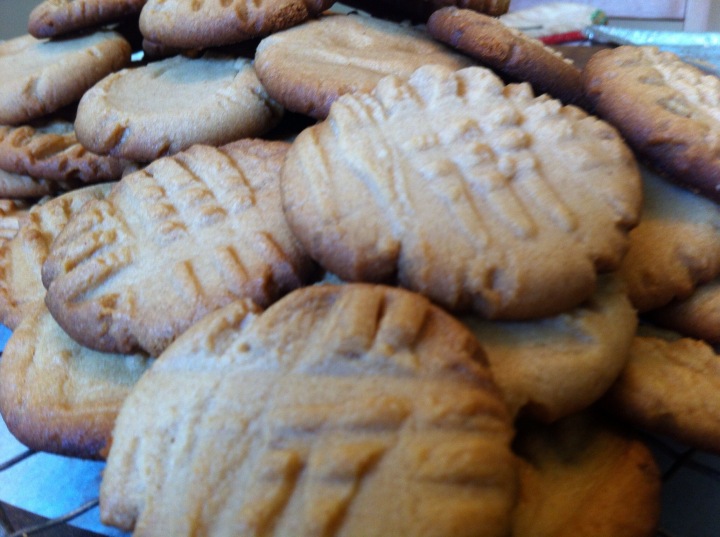 My goodness, June is almost half over and I have not published a single post yet. This isn’t from a lack of interest–I have lots of posts in my drafts– but I seem to have an issue with finishing posts and hitting the ‘publish’ button.

On Friday, I visited my grandparents and we baked peanut butter cookies. Typically, we do enough baking to last the rest of the year, but these cookies are so delicious that we got to snacking and polished off our stash of them. So, of course, rather than cut down our cookie consumption, we just waited for a cloudy day to bake more.

What have you been baking these days??? 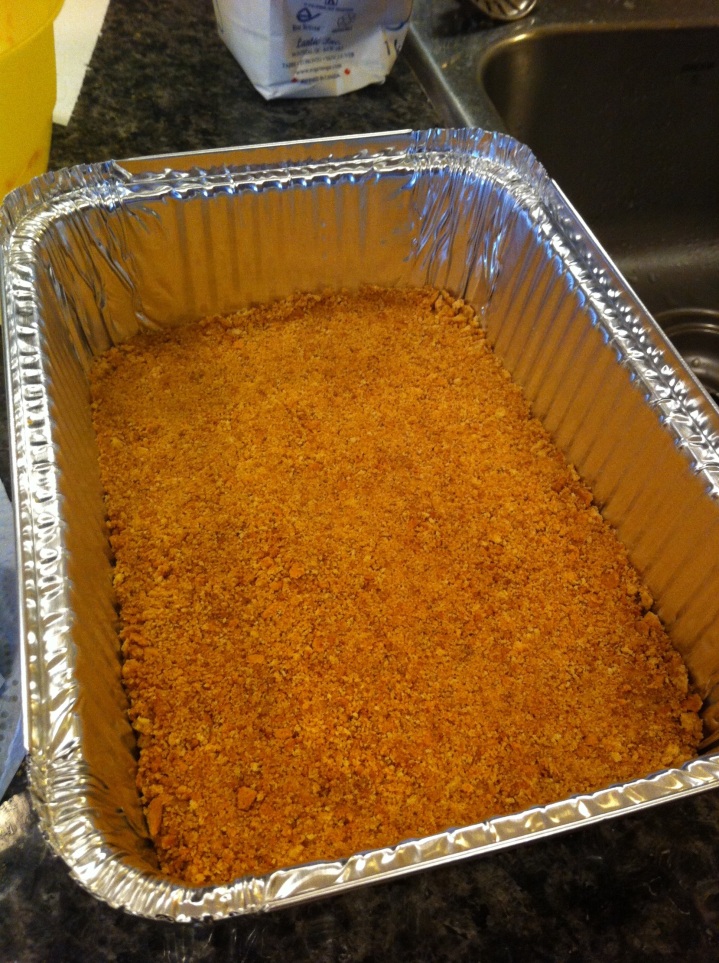 I am debating starting a Baking With Travis series on this blog because my friend Travis and I got together once again last Wednesday for some baking. We endeavoured to make a chocolate cheesecake. My grandmother recommended Martha Stewart’s triple chocolate cheesecake recipe, but we made a few modifications. 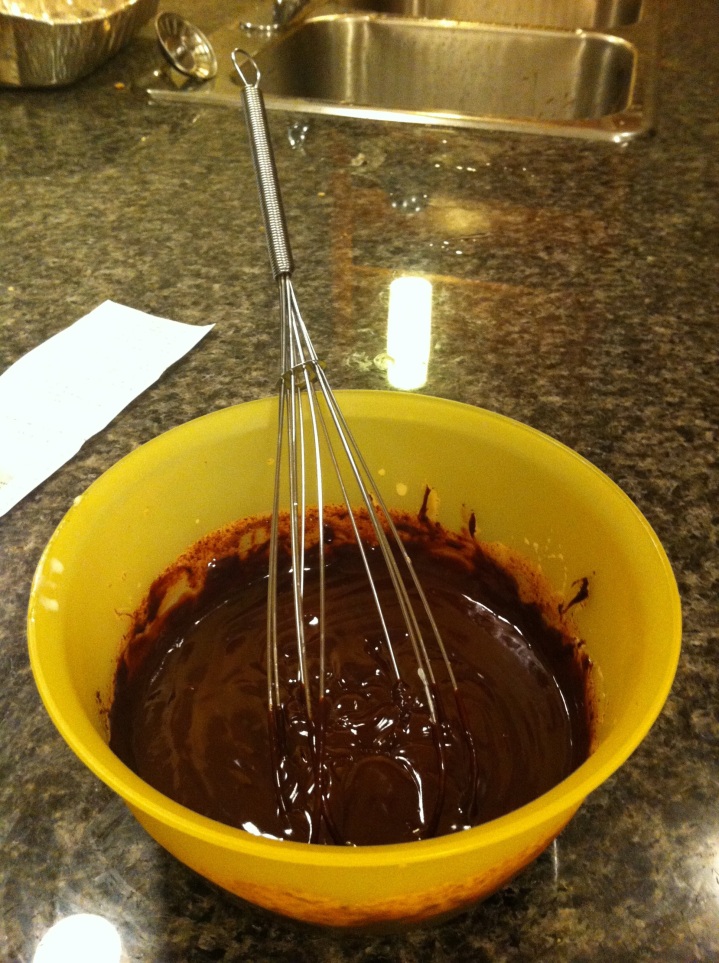 What is your favourite kind of cheesecake???

I hope everyone had a wonderful Easter yesterday with family and friends. I celebrated the holiday with my mother and grandparents and, while my grandparents insisted that they prepare dinner, I got to bring the dessert: a giant cupcake cake!!! Here are a few pictures of the baking process 🙂 🙂 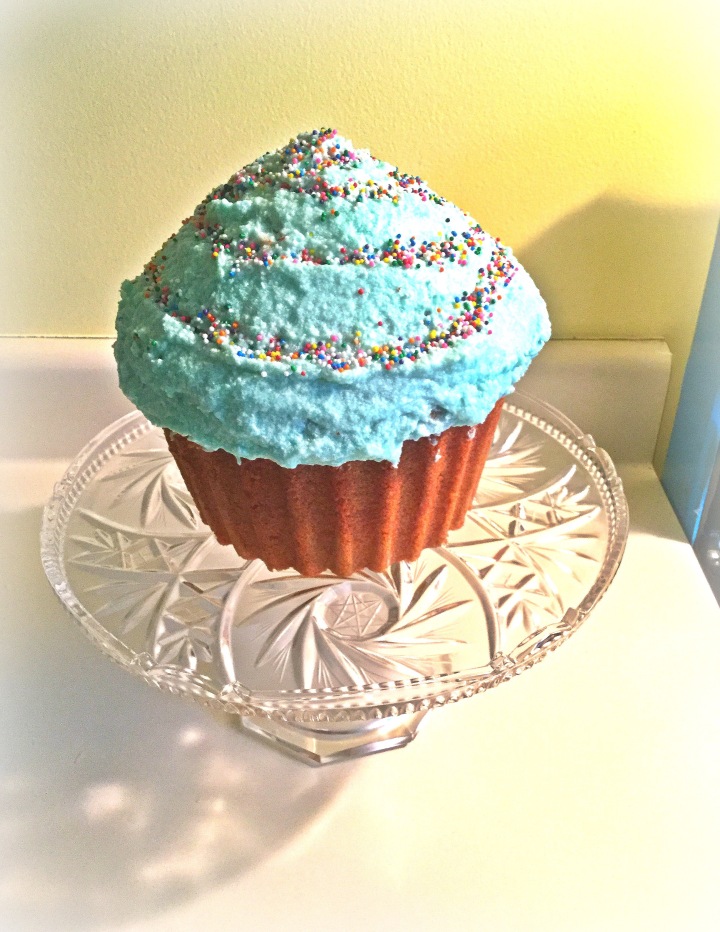 This is the niftiest cake pan I have ever come across. Made by Wilton, this cast aluminum pan has a non-stick surface and a lifetime warranty, making it the perfect addition to any baking arsenal. You can get it here if you are interested 🙂 🙂

What did you get up to for Easter yesterday??? 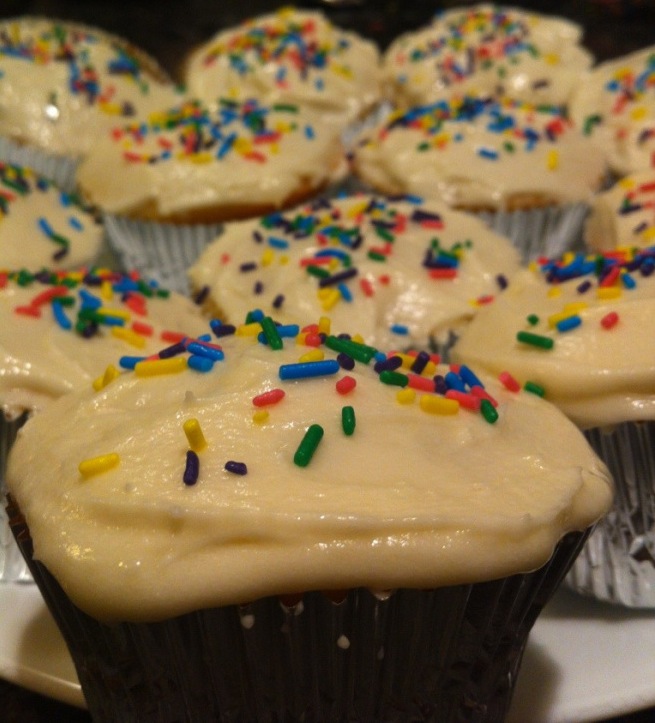 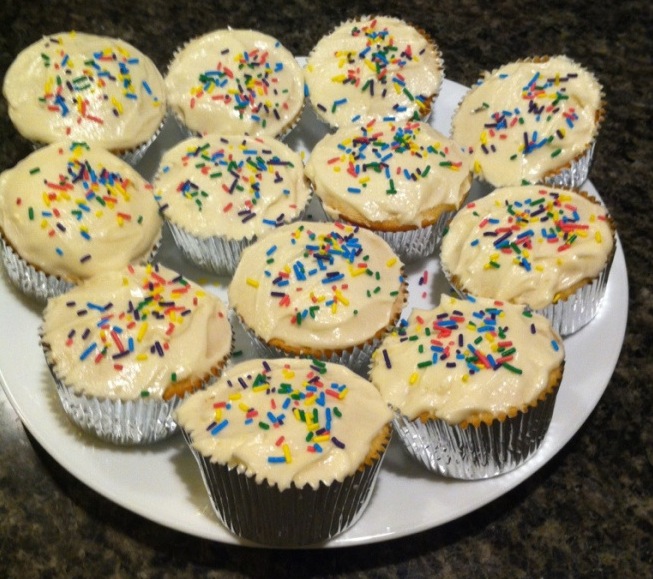 A few weeks ago, I learned that my friend Travis had never baked cupcakes before in his life. I was completely shocked that he had made it almost 28 years on this planet without ever making them, so we got together last Wednesday to bake. I loved this recipe I got from my grandmother so much that I wanted to share it here. I have no idea where she got it from, but credit to whoever came up with this perfect cupcake recipe.

And now for the frosting!!!

Let me know how you find this recipe if you try it out 🙂 🙂 What have you been baking these days???

The last few days have been kind of crazy with Christmasy goings-on and I haven’t been keeping up with my daily Blogmas posts about them. So today, December 13th, will mark the most posts published on Literary and Lovely in one day to date. I’ll do my best to stagger them a little bit so you aren’t bombarded with the last five days of Christmas action, but be prepared: there are more posts to come today, so keep an eye out for them!!! 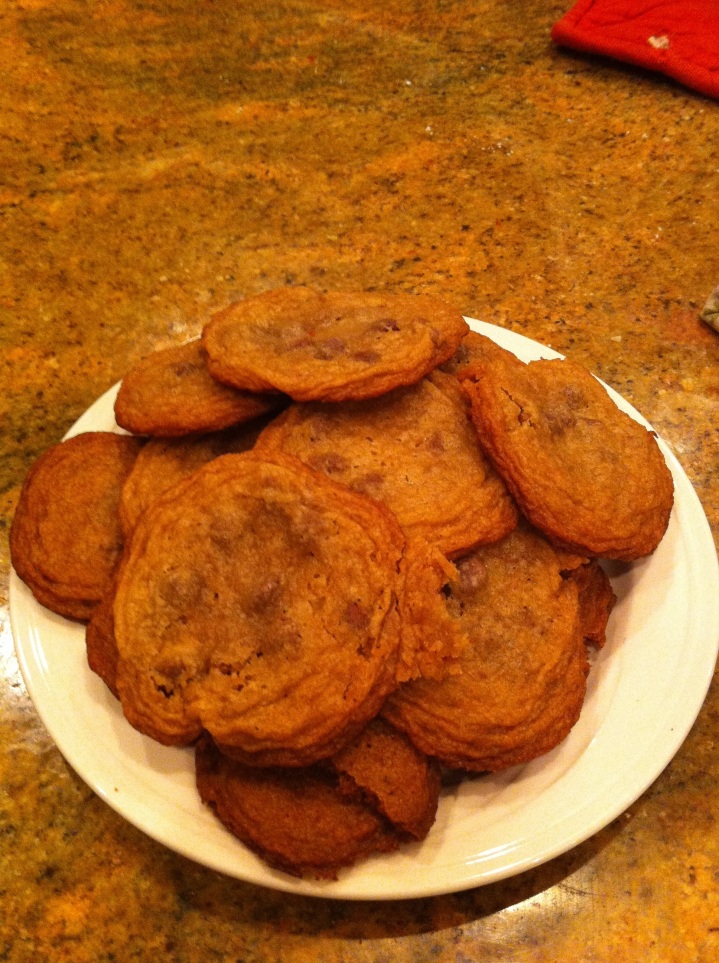 Back on December 9th, I met up with a friend and, spur-of-the-moment, we decided to bake some chocolate chip cookies. His kitchen is incredible, decked out with all the bells and whistles, and I had been dying to give baking in it a whirl, so this was so much fun. His aunt uses Irma Rombauer’s The Joy of Cooking recipe for her chocolate chip cookies, and they always get eaten before midnight on the day they are baked, so it seemed like a fool-proof way to go. We did, however, make a few alterations to the recipe, which will be shown between *. . .*

Step 1: Preheat the oven to 375 °F, and grease or line two cookie sheets. *We did not grease the sheets because my friend’s family typically uses PAM, and I can’t eat it. It was definitely a mistake to bake on an unlined baking sheet, but who doesn’t love less-than-perfect cookies that become testers???*

Step 2: In a large bowl, beat together the butter, sugar, and brown sugar until well-mixed.

Step 3: Whisk together the flour and baking soda.

Step 4: Add egg, salt, and vanilla to flour mixture, and stir until well-combined and smooth. *We actually added 1 ½ tsps of vanilla because my friend’s family really likes it, but next time I would stick with just the ½ tsp.*

Step 5: Stir in chocolate chips. *We put in the suggested ½ cup but I would definitely put in at least a full cup next time*

Step 6: Dollop the dough in teaspoons onto the cookie sheets about 2 inches apart. *Pretty sure our drops of dough were larger than a teaspoon . . . *

Step 7: Bake for 11 minutes, then let stand briefly before moving them to a rack to cool.

This recipe makes about 45 cookies. *We didn’t make nearly this many cookies with this recipe, mind you, we had a few people snacking on the cookie dough . . . * 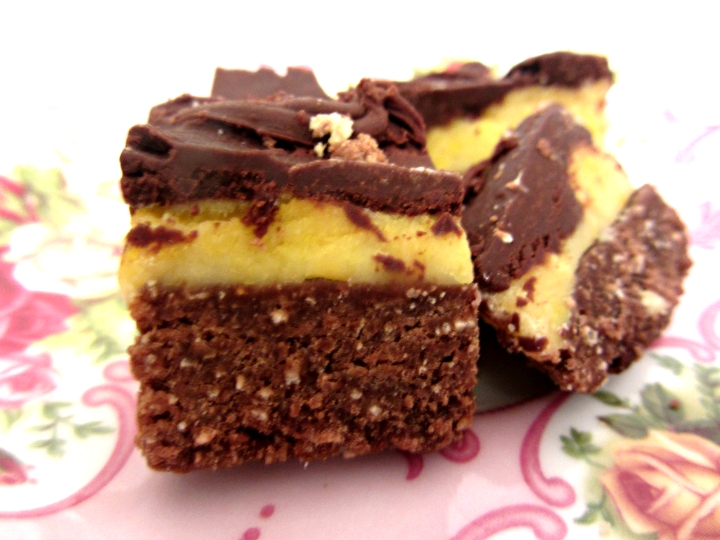 For anyone who might not know, Nanaimo bars are a three layer dessert featuring a crumb-based layer, a butter icing layer, and to top it off, a melted chocolate layer. A super cool fact is that these delicious no-baking-required treats are named after a west coast city very close to my own home: Nanaimo, British Columbia!

Way back in 1986, the Mayor of Nanaimo, Graeme Roberts, started up a contest to find the best Nanaimo Bar recipe. The contest lasted a month, and almost 100 different recipes were submitted, but the winner was Joyce Hardcastle.

Now I don’t know if my family Nanaimo Bar recipe is the same as Joyce Hardcastle’s, and it hasn’t been recognized by any mayor, but it is the most delicious recipe I have come across, and as a Canadian, I have tried lots!!!

Step 1: To make the bottom layer, mix butter, sugar, egg, and chipits in a heavy saucepan, and stir until mixed. Then add in crumbs, coconut, and nuts, and press into 9” square pan

Step 2: Cream butter, custard, milk, and icing sugar until smooth and spread evenly over crumb layer. Then chill these two layers in the fridge until set.

Step 3: To make the top later, melt butter and chipits over low heat, then allow to cool. Once cooled but still in liquid state, pour over first two chilled layers..

Step 4: Chill the pan in the refrigerator.

And voilà: a super-easy no-baking-required dessert!!! I love adding these to dessert platters, especially at family gatherings because they are the perfect size for snacking, and they always get eaten. The pictures above are of the last few that were left at the end of the day I made them. They went that fast!!! I had set aside a few for photos but somehow the “Do not touch-blog material” sign was misread as “Help yourself to these delicious treats.”

If you haven’t made Nanaimo bars before, give this recipe a try and let me know what you think!!! 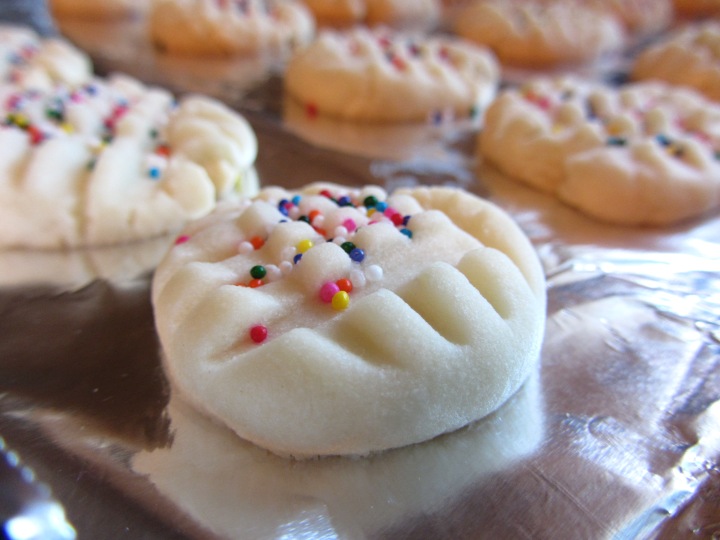 One of my favourite festive things to do is Christmas baking with my grandmother. Every year, we test out new recipes and make old favourites, and for this round of baking we wanted to make one of our traditional recipes: shortbread cookies. They are super easy to make, and so delicious to eat.

Step 1: Mix these ingredients in a bowl until they are smooth.

Step 2: Roll the dough into small balls and press with a fork to create a ribbed design, or cut out shapes with cookie cutters. Depending on how wide your cookie tray is, limit the number of cookies per row to about 4, as they will spread out in the oven and you don’t want them melding together. Although, that would make for one massive cookie . . .

Step 3: Preheat the oven to 350 degrees Fahrenheit, and then pop them in the oven for 10-12 minutes.

Step 4: Enjoy your delicious, warm, home-made shortbread cookies with a cup of hot chocolate or tea.

I love giving these as presents to people, having them out when company comes over, and snacking on them while studying for final exams.

What are you baking this Christmas season???