I picked up this book from Chapters way back in spring, and even mentioned it in a book haul post, but it got stuck near the bottom of my TBR pile, and it wasn’t unearthed until about a week ago when I did a major overhaul of my bookshelf organization system.

I started reading the poems in this book yesterday afternoon, and had them finished by the end of the day they were so good. I didn’t want to put the book down, so I ended up toting it to all of my classes and reading during lectures (oops . . . ) But then this morning I picked the book up again and started re-reading them all, knowing something new would be revealed the second time.

The poems are part of what Tyler Knott Gregson calls the typewriter series, which shows his ongoing love of crafting poetry using whatever paper is at hand, and the permanence of typewriter ink. The best way I can describe these poems is that they are recordings of the poet’s stream of consciousness, yet at the same time sound as though they were crafted with such care and attention that they must have been written over long expanses of time. 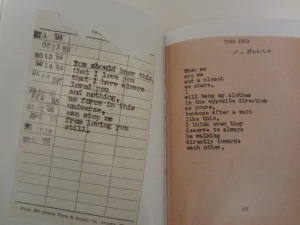 A neat feature about this book is that it is as much a book of photography as it is a book of poetry. As you can see in the photo on the right, the poems are written on anything, such as a library book slip, or the last page of a book. The way these poems are typed on such paper fragments and photographed in this book makes them seem haphazardly, but their words ring so true and are so thought-provoking that they must have been written with gentle finger strokes on keys, and pauses in between every few words to ensure they said everything Gregson wanted them to, and hid even more in the spaces between.

Just to give you a little hint of what these poems are about, I’ve included a larger scale of the picture above so you can read two of these incredible poems. The one on the right is one of my favourites 🙂 🙂

Have you read this book before??? What did you think???