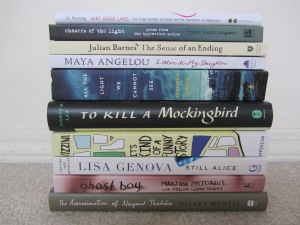 Oh my goodness, it has been way too long since I did a book post!!!

Where have I been you might ask??? Well, for starters, university picked up speed, and I found that the majority of my time was spent in a little nook of the campus library until late hours nearly every day completing homework assignments, drafting essays, and studying for midterms. Never again will I think that I can take six courses at once (I only completed five though; I wizened up halfway through term and dropped one). If I ever post on here, or on Twitter that I’ve had the brilliant idea of cramming six courses into one term, someone PLEASE comment and remind me of this post, and the pact that I made with myself. Life balance is key, and I tossed that entire concept out the window this past term.

However, over the last few months, I did meander down to the local Chapters bookstore several times to pick up some books to read for when term ended and I had nothing to do, so I figured what better way to get back into the book blogging groove than to do a haul post on all the books I have added to my collection since my February haul post???

1. All the Light We Cannot See by Anthony Doerr

I have to admit, I have not read this book yet, but I hope to crack it open sometime next week once I get through the book I am currently reading (coincidentally enough, a book that will also be featured in this haul post). From what I can gather, this book is set in Paris during World War II. It begins with the story of Marie-Laure, a deaf child, and her father, the master of locks at the Museum of Natural History. The pair flee from Paris to the home of Marie-Laure’s great-uncle, and carry with them “what might be the museum’s most valuable and dangerous jewel.” Simultaneously, the story of a German Orphan named Werner unfolds and, with a talent for building and fixing radios, he becomes part of an academy for Hitler Youth. And, of course, Marie-Laure’s and Werner’s paths will cross.

2. It’s Kind of a Funny Story by Ned Vizzini

While this book was released in 2006, and a movie adaptation was released in 2010, I somehow managed to go quite some time without even knowing this story existed. As much as I don’t like doing this, I unknowingly saw the movie first, but once I found out it began as a book, I knew I had to have it. My boyfriend at the time said that the story resonated with him; he felt like he was in the same position as the protagonist, Craig Gilner. In essence, this is a story about a teenaged boy who wants to succeed in life, which for him means that he needs to attend the right schools and colleges, and get the right job. But this generates too much pressure, and Craig nearly kills himself. So, he checks into a mental hospital, and the story chronicles his time there, where he learns to deal with his anxiety, and what life is all about. After watching the movie, I realized that my then-boyfriend was right, but on a larger scale than he probably meant to be. I find that all teenagers are, to a degree, Craig Gilners. All want to succeed at something, and all fear buckling under the pressure of the expectations they set for themselves and believe others set for them. I found this story to resonate with me too, as I’m sure it does for almost any teenager who feels a little bit lost and overwhelmed in this big show we call life.

I ordered this book online about a month ago when I saw a DVD of the movie adaptation sitting on a local library bookshelf. I read the back of the DVD, and realized what an incredible read the book would be, and I didn’t want to spoil any of the intensity of Lisa Genova’s writing by knowing the plot through the movie first. There is a common misconception that Alzheimer’s Disease only targets the old, the people with grandchildren, the people that live in nursing homes. What this book does is shed some light on the harsh truth that even a 50-year-old cognitive psychology professor at Harvard University can be diagnosed with Alzheimer’s. I haven’t read this one yet, but I am saving it for a rainy day when all I need is a good read and my cat curled up at my feet. And, for when that day comes, I have the movie on hold at the library so I can pick it up the night before, and watch it the minute I finish reading the last page.

4. To Kill a Mockingbird by Harper Lee (50th Anniversary Edition)

I have read this book many, many times before, and yes, I already have a copy, but when an anniversary edition of a novel as classic as this one is released, I don’t think there’s really a choice to not get it. It’s one of those books that, while it may not be read, it will proudly sit on my shelf, representing the 50 years of this story being taught in schools, read in book clubs, and heralded as one of Time Magazine’s 100 greatest novels.

5. Chasers of the Light: Poems from the Typewriter Series

Prematurely, I labeled buying this book an impulse purchase. I loved the cover art, and that Heather’s Pick sticker always reels me in. But, upon cracking it open and reading the first few poems, I was completely hooked. I read them all in about two hours and, upon finishing the last poem, I started all over again, reading it for a second time, sure I had missed something. His poetry is an actualization of the phrase “quality over quantity”, with some poems comprised of only two verses. A great many of his poems remind me of the imagist movement, where each poem is a snapshot of a commonplace event, represented with acute detail.  Finding beauty in the ordinary and gestures of love in the subtle are two of his talents, and he uses them to their full extent in these poems. They will leave you spellbound, guaranteed.

This little book is only 70 pages long, and contains Rowling’s 2008 commencement address at Harvard University. She discusses the value of failure, and the power of imagination, two things that have greatly aided her throughout her life. What I loved about her speech was how thought provoking it was in its simplicity. She told the truth: that there are many benefits that come with failing, and they should be embraced, not avoided. As for imagination, well I think her novels speak volumes (no pun intended) on the power of imagination in changing one’s life. This book has been added to my coffee table collection, and I plan on reading it when I need a little boost of confidence or inspiration that there is always time to do what I love and make a difference.

7. The Sense of an Ending by Julian Barnes 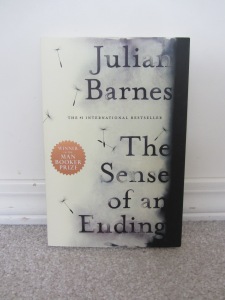 This little novella was the winner of the 2011 Man Booker Prize and, in the words of A.D. Miller on losing the award to Julian Barnes, “It was like losing to Brazil in the World Cup Final.” Now that  is a tribute from one writer to another. I have just started reading this book, but by page 16, I am already hooked. If I didn’t have to get off the bus for work yesterday morning, I would have stayed on for the entire route just to finish this book in one sitting. It is that good. There is something about Barnes’ writing style that makes every line thought provoking. By that I mean that I read a sentence, then pause and ruminate on it a bit before moving on. It’s like I’m scared of missing the genius, but it’s in everything he says, and I want to take it all in. So far an incredible read.

8. Letter to My Daughter by Maya Angelou

I actually picked up this book a week before Mother’s Day, hoping to give it to my mother as a gift. Well, ok, I admit it, I read it. I just couldn’t help myself!!! Angelou dedicated this book to the daughter she never had, but to the millions of readers she considers to be a part of her extended family. These short essays provide insight into parts of Angelou’s life, my favourite being the essay that describes the conception and birth of her son. This is a must-read for anyone who loves Angelou’s work, and anyone looking for a Mother’s Day gift.

9. The Assassination of Margaret Thatcher and Other Stories by Hilary Mantel 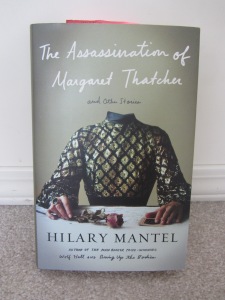 Hilary Mantel has won the Man Booker Prize twice, an unprecedented achievement; once in 2009 for her novel Wolf Hall, and then in 2012 for its sequel Bring Up the Bodies. Having heard incredible things about these novels, I was so excited to find this collection of short stories at Chapters. I have read some of these short stories already (hence the little pink bookmark poking up out of the book in the picture. Oops!!!) and am in love with her ability to craft characters in such depth and weave their lives together. While I am anxiously awaiting the release of the final book in the Thomas Cromwell Trilogy, this collection of stories will most definitely tide me over.

Now this sounds like an incredible read. I first read about this book online, and was dying to find it in stores so I could add it to my must-read shelf. Mini series, this book chronicles the life of a 12-year-old boy who, in 1988, went home from school feeling sick, and never went back. An unknown illness left him wheelchair bound and unable to speak, yet his mind was awake. This book tells his story of the 14 years he spent in institutions and the people he met there and how he eventually learned to communicate via computer, which changed his life. This book was co-written by its protagonist, who is now happily married and living in the UK.

Well, those are all the books I’ve picked up in the last few months. Now that school is over for the summer and work is slow, I am hoping to make it down to Chapters more often, and actually start reading the books on my must-read shelf.

Have you read any of these books??? What did you think of them???